As part of the Mollusc family, Pelecypods (peh-les’-i-pods) include oysters, clams, mussels, scallops, and cockles, and they have been found in some of the oldest marine rocks known (Cambrian) – while are also found today in rivers and seas.

The clam is another example of a long surviving species which has made it through the millennia to modern times. Dating to the Jurassic Period, some 150 million years ago.

One of the five classes in the phylum Mollusca, sometimes known as Pelecypoda. All bivalves are aquatic, living at all depths of the sea and in brackish and fresh waters. With about 25,000 living species, Bivalvia is second to class Gastropoda (over 74,000) in molluscan species diversity. However, the total biomass of bivalves is much greater, and certain bivalve species are numerically dominant in many benthic ecosystems. The most primitive bivalves are infaunal, burrowing into soft sediments, but many families are epifaunal, attached to rocks or shells or residing on the sediment surface. Bivalves are well represented in the fossil record from the early Paleozoic because of their calcareous shells.

The shell consists of two valves with a noncalcified connecting ligament holding the valves together at a hinge plate. The shell layers consist of an outer horny periostracum (protective layer) that can be either absent or eroded in some species, a middle prismatic layer consisting of crystalline calcium carbonate, and an inner lamellar or nacreous layer. In some families such as the Mytilidae (mussels) or the Pteriidae (winged or pearl oysters), the nacreous layer can exhibit a beautiful iridescent sheen, whereas in most bivalves the inner layer is smooth but with a chalky appearance. Hinge ligament tension holds the valves in a gaping position, with valve closure effected by adductor muscles.

The ciliated molluscan gills, properly called ctenidia, are enlarged in the subclass Lamellibranchiata and occupy a substantial portion of the mantle cavity. The ctenidia consist of layered filaments which function primarily to pump water into the mantle cavity and to filter particulate food from the incurrent water stream. The ctenidia of bivalves of the subclass Protobranchia also serve to pump water, but they are smaller and less developed than in the lamellibranchs and do not serve to filter food particles. Protobranch bivalves are deposit feeders that gather food by extending thin muscular palp proboscides to probe soft sediments and entrap organic detrital particles. Bivalves of the subclass Septibranchia (sometimes called Anomalodesmata) have highly modified ctenidia that lack filaments. A septum divides the mantle cavity into dorsal and ventral chambers, and water is pumped by muscular contraction of the septum wall.

Some bivalves have a foot for locomotion. If present, the foot can be extended from the shell by blood pressure and dilated to act as an external anchor while movement is effected by contraction of retractor muscles. Some bivalves of the family Pectinidae (scallops) lack a foot but are highly active swimmers through clapping their valves and jetting water through orifices (openings) near the hinge. Some bivalves, such as oysters and giant clams, are sedentary and lack a foot as adults.

In general, bivalves are bilaterally symmetrical and laterally compressed. They have a fleshy mantle that secretes the shell enclosing the body (see illustration). The mouth is located anteriorly in bivalves; and in the Lamellibranchiata, the largest subclass, the mouth is flanked by paired labial palps that act to sort food prior to ingestion. Sensory organs are located on the outer mantle margin that has the closest contact with the environment. Frequently these sensory organs are borne on tentacles, and they are sensitive to tactile and chemical stimuli. Certain species of scallops have highly developed light-sensing organs or “eyes” on their mantle tentacles. 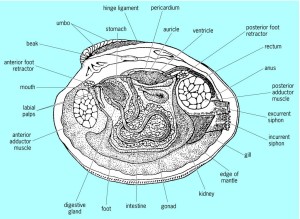 Bivalves exhibit a wide range of reproductive strategies. Most bivalves are dioecious or have separate sexes, while others exhibit various forms of hermaphrodism. For example, as mature adults, scallops carry both eggs and sperm, while oysters exhibit protandric hermaphrodism in which the oysters first develop as males and in subsequent years change sex to develop ovaries. Most species of bivalves shed eggs and sperm directly into the water, where fertilization occurs; in others, eggs may be held in a brood chamber, where they are fertilized by sperm in incurrent water, and released as well-developed larvae into the water. Most bivalves go through several planktonic stages prior to settlement and metamorphosis to their benthic form.

Many species of bivalves are actively farmed either for human consumption of the meats or for shell products. Most of the gem-quality pearls sold in the world originate from farmed pearl oysters of the genus Pinctada in Japan, Australia, and islands of the tropical Pacific. Fresh-water pearls are produced from fresh-water mussels in the United States, China, and Japan. Other species of bivalves are of economic concern by virtue of being pest organisms or biological invaders.

The fossil record of the Bivalvia can be traced to the Lower Cambrian Fordilla. The Ordovician was a major period of bivalve speciation, but throughout the Paleozoic the Bivalvia remained second to bivalves of the phylum Brachiopoda in species diversity and abundance. During the Mesozoic Era, the brachiopods declined in importance. It is probable that diverse adaptations of the Bivalvia to avoid predatory gastropods, arthropods, and fish evolving during the Mesozoic were a major factor in the replacement of the more exposed brachiopods as the dominant bivalves. The evolutionary radiation occurring during the Mesozoic includes the emergence of many species of bivalves that bore into rocks, hard corals, and wood. The Mesozoic emergent family Ostreidae, which includes oysters, remains to the present. The transition from the Mesozoic to Cenozoic began with the extinction of many ancient families and the emergence of several modern families

Being freshwater and marine mussels, they have always been highly prized sources of food: bivalve shells abound in stone age as well as Roman settlements in the UK and elsewhere. They are a highly palatable food source that feature the wold over; they themselves filter feed on plankton. In October 2007 a 405 year old clam was caught off the coast of Iceland and was officially declared as the oldest living animal on our planet!