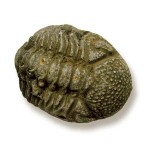 Trilobites are remarkable, hard-shelled, segmented creatures that existed over 520 million years ago in the Earth’s ancient seas. They went extinct before dinosaurs even came into existence, and are one of the key signature creatures of the Paleozoic Era, the first era to exhibit a proliferation of the complex life-forms that established the foundation of life as it is today. Although dinosaurs are the most well-known fossil animals, trilobites are also a favorite among those familiar with Paleontology (the study of the development of life on Earth), and are found in the rocks of all continents.

No animal better captures the drama of evolution and extinction. Long before the fish inhabited the seas and the Dinosaurs roamed the land, Trilobites appeared some 600 million years ago during the Cambrian period. They belonged the phylum Arthropodal (joint-footed), a phylum which to this day represents the most successful (78%) of all animal life forms, including crabs, centipedes, spiders, shrimps and insects.The Trilobites, living in shallow seas, flourished as swimmers, crawlers and burrowers for some 350 million years. They evolved rapidly into many beautiful, bizarre and, even by today’s standards, futuristic forms.

The name Trilobite–meaning three lobed one–is in reference to the three longitudinal lobes across their heads (cephalon), consisting of a slightly raised central lobe (the axis) and two flatter pleural lobes on either side. The entire bodies were also divided into three: the head (cephalon), thorax (chest) made up to a group of up to 30 segments and the tail (pygidium). Underneath and rarely preserved are three pairs of legs for the head and paired legs for each pleural groove. Trilobites are the earliest known animal to possess vision. Some possessed eyes and some seem to have no eyes at all, while others possessed beautiful compound eyes capable of 360 degree vision.

First capturing man’s eye some 25,000 years ago in France where two specimens were found is association with a Cro-magnon settlement, at a site called “La Grotte du Trilobite”, one was found with a hole drilled into it and worn as an adornment. Others have been found in the tombs of Egypt, Greece and Rome. Sold on the street of 15th Century Europe and collected by Thomas Jefferson and Benjamin Franklin, today they are collected, studied and enjoyed by people from all walks of life.

Evidence of these extraordinary marine creatures are found on all continents, entrapped in the hardened sediments of Ancient Seas. The following Trilobites have been prepared by a Master of his Art, Jeffrey Hammer, who spends countless hours under a microscope to open one of these time capsules and to unveil one of Nature’s Frozen Masterpieces allowing a view back in time to the Dawn of Life.