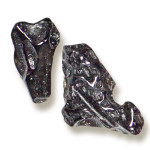 “To anyone who has worked with them, tektites are probably the most frustrating stones ever found on earth.” - Henry Faul, 1966.

Categories: Out Of This World, Tektities.

What is a tektite?
Tektites are rounded, pitted bodies of silicate glass, nonvolcanic in origin, most likely derived by large hypervelocity meteorite collisions with terrestrial rocks. Commonly about the size of a walnut, tektites can vary from sand grain sized microtektites, weighing grams, to large, blocky, Muong Nong-type specimens weighing up to 12.8 kg (28 pounds). Tektites can differ in both color and age, depending on where they are found. Commonly black color, tektites can also vary from light green to greenish yellow. Ages vary from ~35.5 million to ~750,000 years old. Chemically, tektites are uniquely characterized by extremely high silica contents ranging from ~70% in Australasian tektites to ~98% in Libyan Desert Glass.

Tektite, a small object of natural glass whose mineral composition is different from that of glass formed by volcanic activity on the earth. Most tektites are opaque and black. Some are dark brown or green. They are composed mainly of silica (silicon dioxide), with smaller amounts of various metal oxides. Tektites are commonly about the size of a walnut. In sediments on the ocean floor, large numbers of microtektites (tektites of microscopic size) have been found. Many tektites have shapes resembling a variety of rounded, symmetrical objects: teardrops, spheres, dumbbells, half moons, and buttons.

There are several distinct groups of tektites, the tektites in each group having the same age and a similar chemical composition. The geographical area in which the tektites of a given group are found is called a strewn field. The locations of the major strewn fields and the ages of the tektites found in them are: Southeast Asia, Australia, and the Indian Ocean, 700,000 years; Ivory Coast and adjacent parts of the Atlantic Ocean, 950,000 years; and the Caribbean, southern North America, the equatorial Pacific Ocean, and Southeast Asia, 34 million years. 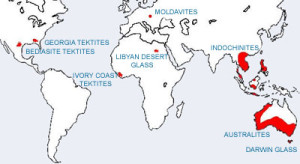 The origin of tektites is uncertain. Their streamlined shapes indicate that they fell through the atmosphere from space, and their distribution on the surface of the earth indicates they were ejected from the moon or the earth itself. One theory is that they were formed as a result of huge meteorites striking the earth; the impact of the meteorites melted terrestial rock, which was flung above the atmosphere and then fell scattered to earth. Another theory holds that tektites were ejected by the impact of meteorites on the moon. However, chemical analysis of the soil from many different areas of the moon indicates that this explanation is unlikely. According to a third theory, tektites were hurled toward the earth by lunar volcanic eruptions.

Color: black, Green or Colorless.
Color of streak: White
Luster: is vitreous to dull.
Transparency: Gemmy tektites are transparent to translucent, but most are nearly opaque.
Crystal System: does not apply because tektites are amorphous.
Habits: are usually small nodules or splinters that vary from simple rounded shapes to very intricate natural carvings. Many have smooth, scarred, or pitted surfaces.
Cleavage: is absent.
Fracture: is conchoidal.
Hardness: is 5 – 6.
Specific Gravity: is approximately 2.5 (somewhat light).
Other Characteristics: Can sometimes be directly associated with meteorite impact craters.
Notable Occurrences: include Moldavia region of Eastern Europe; Thailand and southeast Asia; Australia and Georgia, USA.
Best Field Indicators are color, odd shapes, localities and lack of cleavage or crystal faces