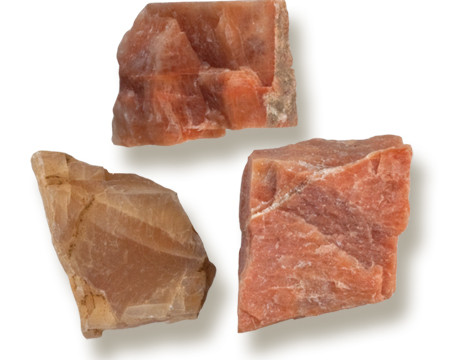 Moonstone is the opalescent variety of Orthoclase, which is an alkai feldspar, with a blue or white sheen, referred to as a “schiller”, rather like the shine of the moon, hence it’s name. The sheen is created by the reflection of light from the internal structure of layers. The layers are thin albite that give the attractive blue, while thicker layers feldspar produce the white color. It’s most amazing, and much like the moon!

Other names for this stone are water opal, fish-eye, and wolf’s-eye. Long considered to have inherent connections to the moon by all ancient cultures familiar with the stone, it was used during the waxing of the moon for love charms and during the waning of the moon to foretell the future.

Moonstone is the most well-known gemstone variety of orthoclase feldspar, a potassium aluminum silicate. It is a transparent to opaque oligoclase, a variety of plagioclase albite and sheet mica. Moonstone is known to exhibit a distinct sheen under certain lighting conditions, and it is the sheen which renders moonstone one of the most remarkable gemstones available today. In fact, its name is owed to the almost magical, bluish white shimmer it exhibits, which closely resembles that of moonshine. Gemologists refer to the shimmering phenomena as ‘adularesence’.

The optical effect of adularesence is a result of moonstone’s unique structural pattern. Tiny inclusions of albite, a sodium aluminum silicate, intermix with host rock layers of orthoclase, a potassium aluminum silicate. The alternating layers of different feldspars form a lamella, scaled structure which causes an interference of light as it enters the stone. Thin layers of alternating silicates tend to refract more attractive and colorful sheens, whereas thick layers of silicates produce less attractive, white to colorless sheens. As light enters the stone, it is refracted and scattered, producing an extremely unique and attractive play of both color and light. With moonstone, the aura of light actually appears to glow from deep within the surface of the stone.

The moonstone in India is quite a sacred stone, it is only permitted to be displayed on a yellow cloth. In this culture they called the moonstone Candra Kanta, and it is told that moonlight from a full moon gives the gemstone occult and magical powers. It is believed to bring much good fortune and allows one to see the future.

World-famous Moonstone - Moonstone was extremely popular in the times of “Art Nouveau”, which took place more than 100 years ago. It was used to decorate a striking amount of pieces of jewelry created by a famous French Master-Goldsmith, René Lalique as well as many of his contemporaries. His rare pieces are typically only found in museums or in highly-guarded private collections.

Moonstone is not very durable or hard compared to other types of jewelry gems, such as quartz, tourmaline or sapphire. Since ordinary dust often contains quartz, simply wiping dust off your moonstone can eventually result in surface scratches and reduced polished. Therefore, quite a bit of care should be taken to retain the beauty of your Moonstone.

METAPHYSICAL:
Few gemstones have accumulated as much lore and legend as that of moonstone. Moonstone has revered for thousands of years by cultures from every part of the world. According to Hindu legend, moonstone was formed from moonbeams; at one time it was believed that if you held one in your mouth during a full moon, you could see your future.

Moonstone is also highly prized among lovers, as it’s thought to arouse tender thoughts and passion. Those who possess moonstone are thought to be able to foretell their future life together as a couple. Moonstone is the official birthstone for June and is associated with the Zodiac sign of Pisces.

In Antiquity, as well as in the Middle Ages people believed that the cosmos is reflected in gemstones. The esoteric movement revived the ancient belief and the gem industry made it another marketing tool to promote certain gems. The healing powers of gems remain a controversial issue, but have been mentioned for centuries by healers, shamans and medicine men of many cultures and civilizations. Whether it’s a fact or simply a placebo effect, it truly doesn’t matter as long as it helps those who need it. The best practice for crystal and metaphysical use is to wear the gemstone in direct contact with the skin, especially close to the troubled part of the body. Physically, moonstone is thought to alleviate the symptoms and pain associated with headaches and common muscular backaches.

Mystical Birthstone for the Month of June.