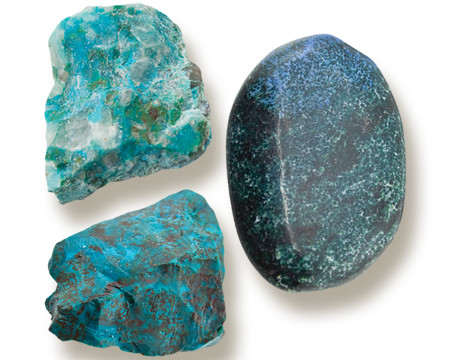 In ancient lore, the Egyptians called Chrysocolla the “Wise Stone of Conciliation” and reassurance throughout the world. As legend reports, those who wore this stone generally came up with clever compromises in all types of situation that outwardly appeared unbearable and impossible to negotiate. At the same time, these people seemed to be protected from psychological damage that often people in negotiation succumb to.

Chrysocolla is often confused with Turquoise, but is actually nothing like Turquoise past the visual inspection.

Chrysocolla is a gemstone quality hydrous copper silicate, often forming with traces of copper salts, iron and manganese oxides. Chrysocolla is known to form in oxidation zones of copper ore bodies and is actually considered a minor ore for the mineral copper. Although Chrysocolla may be a ‘lesser known’ gemstone, it is still a very fascinating stone highly sought-after by many avid gem and mineral enthusiasts, prized especially for their attractive colors and unique multicolor patterns. The name ‘Chrysocolla’ was derived from Greek words ‘Chrysos’ and ‘Kolla’ which translates as ‘gold’ and ‘glue’. It earned its name because it was often used as a gold soldering agent, but eventually, the term evolved into a generic name essentially referring to any green copper-bearing mineral.

Chrysocolla belongs to a very small group of copper-bearing gems which also includes malachite, azurite, larimar, oregon sunstone, paraiba tourmaline andturquoise. Chrysocolla is most famous for its alluring, vivid blue to green cyan color, which is owed to the presence of copper impurities. Chrysocolla is often confused with turquoise and azurite owed to their shared visual similarities of color and luster. Chrysocolla commonly forms with other copper-bearing minerals which results in very interesting and unique mixes of different colors and mottled patterns. Some of the more common mineral mixtures include blue azurite (which Chrysocolla often psuedomorphs with), green malachite and turquoise. Chrysocolla may also form with clear druzy layers of glossy quartz, essentially forming a natural doublet. In many cases, quartz crystal may actually form intergrown thoughout the stone and not just as druzy layers. These quartz-hybrid mixtures are harder and much more durable than pure Chrysocolla alone, often rendering them suitable enough for jewelry use.

Chrysocolla generally appears in clusters like grapes or in  a crust. More often than not they are intergrown with Opal, Quartz, Malachite, Azurite and/or Turquoise.

METAPHYSICAL:
In 315 B.C., Chrysocolla was first used by a Greek philosopher and botanist known as Theophrastus. During early times, Chrysocolla was used as a soldering agent and in ancient Egypt, it was popularly known as the ‘wise stone’ as it was thought to be able to shield the mind during times of negotiation. Chrysocolla also is believed to have the ability to reduce violent actions to increase sensitivity, which is why Cleopatra was known to wear chrysocolla jewelry. Chrysocolla is known among Native Americans for its ability to strengthen resistance and feelings of calmness in replacement to feelings of turmoil.

Traditionally, Chrysocolla is a stone of peacefulness, said to alleviate fear, guilt and nervous tension. It is thought to crystallize feelings of love, acceptance and tolerance. Chrysocolla is a favored gemstone by many singers and musicians. Physically, Chrysocolla is thought to help in alleviating cramps, throat infections, liver detoxification, relieve ulcers and the symptoms of arthritis. Chrysocolla is a considered a stone of Cancer and associated with the element of Water. It is very cleansing and it absorbs negativity. It can help flush and heal heart blocks, primarily working best Heart Chakra, although it can revitalize all of the chakra’s.