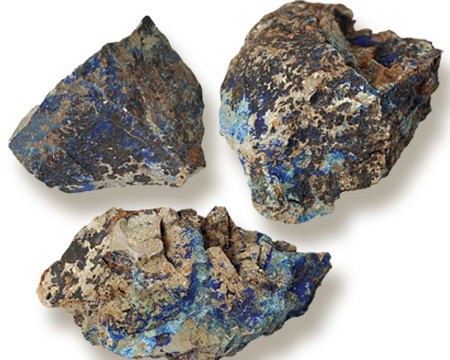 One of the first major sources for Azurite was discovered in Chessy, a small commune located in the eastern suburbs of France, close to Lyon. Owed to its Chessy origin, Azurite earned its locality-based trade name, ‘Chessylite’. In addition to gem use, Azurite is also an industrial gem, much like popular garnet. In fact, since the Middle Ages, Azurite has been used for the production of pigments and textile color dye.

Azurite is a rare variety of gemstone quality copper ore. Azurite is one of two basic copper carbonate minerals (malachite is the other). Azurite is rarer than malachite and considered more valuable as well. Azurite was named after the Persian word ‘lazhward’, which refers to its distinctive, vivid blue color. Azurite is a fairly soft stone and its use in jewelry is actually quite limited. In fact, Azurite is more sought after by gem and mineral collectors, rather than jewelry designers. It is most often carved into interesting ornamental shapes and designs instead of being faceted for mainstream jewelry-use.

Azurite can be identified easily by its unique Azure Blue color. It is fairly soft and usually a simple scratch test can usually distinguish Azurite from other gemstones. It is often found with Malachite, but since Malachite is obviously green in color, there is not much difficult separating the two. Azurite color does resemble lapis lazuli, but it lacks the gold pyrite inclusions of lapis. Other gems that can cause confusion are sodalite, lazulite, dumortiertite and hauynite, but azurite’s color is very unique and through close inspection, all of these similar gems can be distinguished thorough basic testing methods.

METAPHYSICAL:
Azurite is a beautiful deep blue stone, known as the ‘stone of heaven’, stimulating the pursuit of one’s heavenly self, providing for guidance through the third eye, allowing for precise verbalization of one’s psychic experiences.

It is said that the Mayans used Azurite to stimulate and inspire the actualization f the mystic self, concentrating on the psychic to facilitate the transfer of information knowledge and wisdom vian thought alone.

In Native American cultures, Azurite has been used as a very sacred stone, facilitating contact with ones spiritual Indian guide; allowing one to both feel the presence and understand the meaning of the visit and the message.
It is said that the name Azurite comes from the Persian word lazhaward meaning ‘blue’. The ancient Greeks and Romans used to ground the stone and use not only for medicinal purposes but also for dye and paint coloring