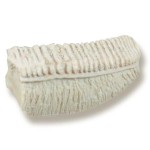 The Eagle Ray, also called a Stingray, fed on shellfish by crushing their shells with their serrated tooth plate. Their bodies were mostly muscle and cartilage, only the teeth were hard enough to fissilize. They grew up to 16 feet in length and had a long, whip-like tail armed with a venomous stinger. Their tail could be as long as their body making them up to 32 feet long. The Eagle Rays were powerful swimmers, capable of launching their bodies several feet out of the water in pursuit of prey.

These fossils were discovered in Morocco, Africa. They are 65 to 150 million years old.

The rays first appear in the Jurassic as forms looking like flattened sharks with enlarged pectoral fins and a reduced tail. The modernangel shark of the genus Squatina, has this intermediate appearance between the swimming shark and the flattened bottom-dweller. The main difference between sharks and true rays is that the rays swim exclusively  by rippling their pectoral fins, sharks swimming exclusively by movement of their tails. Other features that differ from those of sharks are the rows of flat crushing tooth-combs in the downward facing mouth and the large tail spine that is actually a modified dorsal fin spine.

Though all based on a similar body plan, the rays have diversified to fill a n umber of feeding niches. Manta rays are filter feeders, like 2 of the largest sharks, basking sharks and whale sharks. The electric rays have the ability to generate powerful enough electric fields to stun their prey or deter attackers. Many of the rays use their electric field detecting sensors to find prey hidden beneath the sand.

The oldest fossil rays, known mostly by their isolated teeth and spines, are from the Early Jurassic. One form that is known from well preserved body fossils from the Late Jurassic of France is Spathobatis, that had been known from teeth since the Early Jurassic. Other well preserved rays from this time have been found in France, Belmnobatis, and in Germany, Asterodermus. All these early rays are members of the Family Rhinobatidae. There are several living forms in this family, the shovel-nose ray and the guitarfish. These rays all have shark-like bodies that are longer than most rays.

In the Late Cretaceous the Family Myliobatidae, eagle rays, first appear, and throughout the Tertiary they spread widely, still surviving today. These have broad flat crushing plates flanked by many smaller polygonal units, together forming a complex pavement-type dentition, used for grinding crabs and shells. There are many other types of rays, Myliobatis is common in marine deposits around the world from the Tertiary. They are identified by the characteristic crushing plates and occasionally from the stingers – the modified dorsal fin spines – and scales.

Early in the Tertiary rays moved into river and lake habitats. An example of this Heliobatis, a complete body fossil of which was found in Green River Shales from the Eocene of Wyoming. It is believed Heliobatis invaded the river systems when sea levels rose high enough for seawater to flood the lake systems, so the Green River stingrays are not thought to have been primarily freshwater fish.