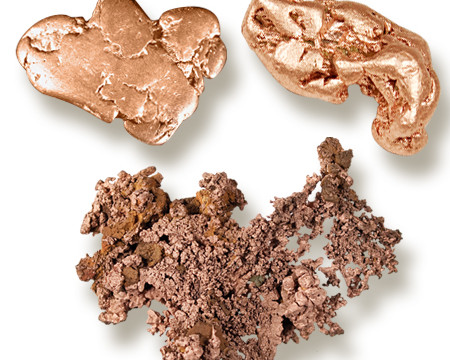 Copper’s history, legend and lore is long and varied. Its use by the human race dates back more than 10,000 years with a great many applications.  It is in fact said to be the first metal of humanity, showing up in Egyptian and Sumerian metallurgy back to 3900 BC.

Although the Egyptians were among the first human cultures to utilize Copper, they were also the first to develop Tin and Bronze.  It was the Egyptians that ushered in the Bronze Age in human history. Early in it’s discovery archaeologists found common cooking utensils and pots. By 2500 BC, it was found in jewelry, crowns and headdresses.  From there it was found to be used in Asia, Pre-Columbian Americans, and specifically in Christianity.

Copper is rarely found in the form of a Natural Nugget. The Copper used for pennies and electrical wire is buried in the earth in very small particles attached to or mixed with other minerals. A process using chemicals and heat is used to condense and purify the copper into a usable form. Native Copper forms where there is volcanic activity and around fault lines.

Copper is a metal mineral with a reddish coloring and a high electrical and thermal conductivity, which is nearly indispensable throughout history.

When Copper has been liquified, a pure Copper surface presents more greenish without ambient light, also a characteristic shared with gold.  It’s characteristic color is due to the reflection of red and orange light while other lights in the spectrum are absorbed.

Copper is an essential nutrient to all plants and animals. In humans (and animals), it is actually found in the bloodstream. Concurrently though, in sufficient amounts, Copper can be poisonous and even fatal to many organisms.

METAPHYSICAL:
As Copper is a conductor of heat and electricity, it is also considered a conductor of one’s spiritual energy, moving it back and forth between people, auras, crystals, and the spirit world. Said to be able to amplify one’s thoughts, sending and receiving psychic communication.

Also said to combat laziness and lethargy, passivity as well as non-acceptance of oneself.  It may stimulate optimism, initiative, independence and diplomacy. It will assist in offering the understanding that it is necessary to release all of the restrictions that one has installed within the self, while in the search for love, or the seeking of one’s believedlife. It provides a harmonic connection between the physical and astral bodies while aligning the subtle bodies as well.

Said to be the bestower of good and the bringer of luck, Copper is said to especially bring positive energy in the recovery of property or possessions when lost or fallen into the wrong hands.

Copper is said to attract money. And although pennies are no longer crafted of copper, those produced in earlier years have been placed in and about one’s kitchen to draw wealth to the household.