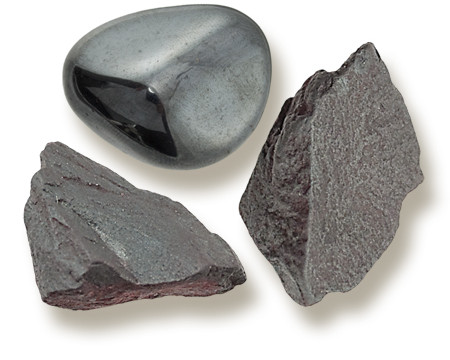 Hematite is the mineral form of Iron, and is black, gray, brown, reddish brown, or red. It is mined as the main ore of iron. When polished it has a look of silver and is used as a gemstone. It is used in art for making hollow portraits called intaglios.

Hematite is a metallic gray iron oxide mineral, and the same stone of a differing variety as specularite.

Ancient Egyptians used it to stanch blood and promote the formation of blood cells. In the Middle Ages is was known as the “blood stone” due to the fact that the water used to polish it would turn red during the process, as if the stone were bleeding. Native American folklore states that war paint made from hematite will make one invincible in battle. People in the eighteenth and nineteenth centuries wore hematite jewelry during mourning.

Scientists of the Mars Exploration Rover Project believe that deposits of hematite on Mars may help prove whether large amounts of liquid water ever flowed on Mars’ surface. They say that where water was, life may have had a chance to thrive as well.

Hematite is said to protect the wearer’s vita energy and guarantee survival. Amulets of hematite have been found in nearly every pharaoh’s tomb as a support in the afterlife.

METAPHYSICAL:
Hematite, besides it’s association with the blood, has also been known to be called the stone for the mind. It brings with it grounding and calming which in turn creates mental organization and focus. It will assist in original thinking, logical thinking, and mathematics.

Decreases negativity and can help balance the mind – body – spirit connection, it draws negative energy away from you into itself. It’s acts well as a stabilizing force. It is a good stone to have around when you are being bombarded with vibrations and energies of other crystals and stones.

Hematite is used for staunching blood as well as to stabilize the circulation of blood and combat venous hyperemia and embolism. Hematite stimulates iron absorption in the small intestine, which in turn improves oxygen supply to the body. It can be in direct contact with the skin, but results in inflammation for some people, so test it carefully before using, and if inflammation should occur or worsen, discontinue contact immediately.

Never wear a hematite near inflammations of any sort, as it can exacerbate them. Never discharge hematite in water. Placed among tumbled rock crystals hematite releases it’s negative energy and at the same time becomes recharged with positive energy.