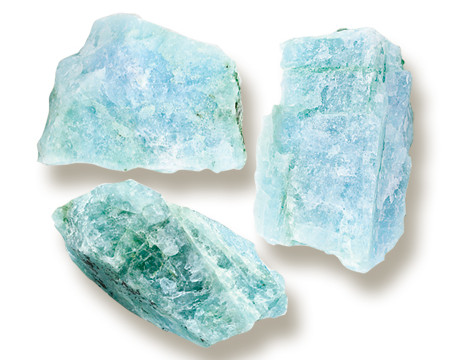 Aquamarine is a blue to green-blue variety of precious beryl. The beryl group of minerals is most famous for chromium-rich, green emerald, which happens to be one of the ‘Precious Four’ gems of the world (diamond, sapphire and ruby are the remaining three).

Aquamarine is one of the official birthstones for those born in March. Aquamarine is exceptionally hard and has an outstanding glass-like luster. It is most famous for its breathtaking sea-blue colors which can range from light blue to dark blue. The name ‘Aquamarine’ was derived from an old Latin expression which meant ‘seawater’.

Aquamarine and emerald belong to the same family, but they are surprisingly different. Aquamarine and emerald are both beryllium aluminum silicates. While emerald is colored by trace amounts of chromium (and vanadium), Aquamarine color is the result of iron impurities within colorless beryl crystal. Aquamarine and emerald have essentially the same specific gravity and refractive index, but emerald tends to be hazy and full of inclusions, while Aquamarine has excellent transparency and clarity. Aquamarine, and other types of beryl, are quite durable and hard, ranging from 7.5 to 8 on Mohs scale of mineral hardness. A dark and deeply-saturated blue is the most desirable and valuable Aquamarine color. Other varieties of beryl include Morganite, Goshenite, Golden Beryl (Heliodor), Green Beryl and Bixbite.

The largest aquamarine of gemstone quality ever mined was found in Marambaia, Minas Gerais, Brazil, in 1910. It weighed over 242lbs, and its dimensions were 19 in long and 17in in diameter. The largest cut aquamarine gem is the Dom Pedro aquamarine, now housed in the Smithsonian Institution’s National Museum of Natural History.

METAPHYSICAL:
Aquamarine originated in the treasure chest of fabulous mermaids, and has, since ancient times, been regarded as ‘the sailors’ lucky stone’. Aquamarine derives its name from the Latin term for seawater and has a long tradition of being a stone for those who spend much of their time at sea. The Greeks and the Romans knew aquamarine as the sailor’s gem too, ensuring the safe and prosperous passage across many stormy seas. Legend has it that aquamarines were the prized possessions of many mermaids and would thus protect sailors from the dangers of sea, including warding off sea-sickness.

In Antiquity, as well as in the Middle Ages people believed that the cosmos is reflected in gemstones. It is no surprise that aquamarine is assigned to the planet Neptune and is also one of March’s official birthstones. The esoteric movement revived the ancient belief and the gem industry made it another marketing tool to promote certain gems.